Tara (Sanskrit:तारा, tārā; Tib. སྒྲོལ་མ, Drolma), the female Buddha, is considered the other most revered Bodhisattva in Tibetan Buddhism, next only to Chenrezig.

In Tibetan Buddhism it is believed that Tara practice was given by Buddha Shakyamuni together with the Vajrayana teachings about the Nature of the Mind and buddhist tantra. It bacame very popular in India and later with the Guru Rinpoche was brought to Tibet.

There are a few accounts about the origin of Tara. According to the most popular story Tara was a young princess who was living millions of years in the past. Her name was Yeshe Dawa, which means "Moon of Primordial Awareness". For many thousands of lifetimes she were making offerings to the Buddha of those times, named Tonyo Drupa. She received special instructions from him about the bodhicitta—the consciousness of a bodhisattva. After doing this practice for a long time, the monks were suggesting Tara that because of her high attainment, to progress further towards enlightenment, she should pray to be reborn as a male. To what Tara answered, that from the point of view of Enlightenment there is no separation between male or female, it belongs to the conditioned world only. Therefore she vowed to be always reborn as a female bodhisattva until samsara ends. After this Tara went into deep state of meditation for ten million years and released tens of millions of beings with the power of her meditation. Seeing this Tonyo Drupa told her she will henceforth manifest supreme Buddhahood as the Goddess Tārā in many world systems in the future.

Another story depicts Tara as being born from the tears of Chenrezig. Once, when the great bodhisattva Chenrezig out of deep compassion was looking to the sentient beings a tears flow from his eyes and formed lakes with lotus flowers. When the lotus flowers opened, it revealed Tara inside. This way from the teardrop from Chenrezig’s left eye White Tara was emanated and Green Tara from his right eye.

When Guru Rinpoche brought buddhism to Tibet, he was also giving many teachings regarding Tara practice to his consort the dakini of wisdom Yeshe Tsogyal and the first Tibetan King who was buddhist – Trisong Deutsen.

People believed an incarnation of White Tara was born in China, who became a princess and mother of Tibet, the wife of King Trisong Deutsen, and the Green Tara incarnation was born as a princess of Nepal. In the next centuries the Tara practice became very popular in Tibetan Buddhism.

The Green Tara is known as Buddha of enlightened activity, who provides protection from fears, she is prayed for a good luck and fortune, and it is said Green Tara protects from 8 obscurations: 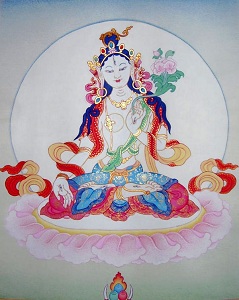 The White Tara is known for compassion, long life, healing and serenity. White Tara counteracts illness and helps to have a long life. She embodies compassion and motivation and is said to be as white and radiant as the moon. She provides relief from bad karma as experienced by ordinary beings in cyclic existence. Tara meditation is often recommended for small kids who haven’t started yet the general practice. Tara is associated with all qualities of the mother and mother’s love.

The most widely popular Tara forms are the White Tara and Green Tara as discussed above. But there can be many more. One of the main Tara practices in Tibetan Buddhism is Praises to 21 Tara or Homage to 21 Tara, which is practiced in all four traditions of Tibetan Buddhism, usually in mornings. As the name suggests there are considered 21 form of Tara, each with a slightly different set of enlightened qualities. But the most popular forms are:

The mantra of Tara is:

The Tara mantra is the same for all forms of Tara. Only the visualisation and some tantric verses of praise may be different accordingly.

In the next post we will talk more specifically about the qualities of each of 21 Tara.