On eight day of the Water Monkey (1284) in a place Dingri Langkor in the western Tibet the Third Karmapa Rangjung Dorje was born. It is said that during labor the moon was rising and the kid, barely born, sat down and said:
- The moon has raised.

Small Rangjung Dorje was highly developed child. Once, when he was three years old, he was playing with friends and suddenly asked his mother to make a throne for him. When his parents built a kind of throne, the boy sat on it, put on a black hat and announced that he was Karmapa.

Soon a rumour about the extraordinary kid spread around and reached the ears of Lama Urgyenpa. Rangjung Dorje was five at the time. Urgyenpa, Lama from tradition of Drugpa Kagyu ordered to bring the kid to him. They met and extraordinary spiritual qualities of Rangjung Dorje immediately convinced Urgyenpa that incarnation of Karmapa is in front of him. To restore their relationship, lama Urgyenpa gave initiations of Chakrasamvara and Hevajra tantras as a gift to the boy.

His meditative training young Karmapa started at the age of seven, receiving initiation as a novice from Lama Kunden Sherab. Soon after he was officially enthroned as Karmapa – the ceremony took place in Tsurphu Monastery, the traditional seat of Karmapa. And right there he continued his education, learning all teachings of Kagyu and Nyingma during the next eleven years, under guidance of Lama Nyenre Gendun Bum and Lama Namtso. The first of them used to compare him to great Indian yogi Saraha. This long period of teachings Karmapa finished with a meditative seclusion in Himalayas.

When he was eighteen, Rangjung Dorje arrived in Sangphu, monastery of Kadam school, to receive a full ordaination to become a monk from its teacher Shakya Zhonnu. Karmapa spent some time in this monastery deeply engaged in studies of philosophy, logic and foundations of Buddhist doctrine. Among the topics he mastered were Vinaya, "Transformation of mind" (Tib: blo sbyong), Five treatises of Maitreya (Tibetan: 'byams chos lde lnga) , philosophy of Madhyamaka, Abhidharma and Prajña Paramita Sutra and commentaries (Shastras).

Third Karmapa had a great hunger for knowledge. Even he had preserved understanding of Teachings from his former lives, he sought to research all contemporary and traditional treatises, all aspects of the Path. He received teachings from the best philosophers of his times. It’s worth to mention just a list of books Lama Kunga Döndrub was teaching him:

When Rangjung Dorje was receiving Kalachakra initiation, he saw the whole universe placed in a human body. Inspired by this vision he wrote an important treatise on Astronomy.

When he completed his learning with Lama Kunga Dondrub, Rangjung Dorje started an extensive meditative training in a solitude, isolated in Garuda’s Castle, near Tsurphu. During his solitude he saw a dream where his teacher Urgyenpa, who had passed away, gave him philosophical teachings of Nagarjuna.

Rangjung Dorje was studying also medicine: Lama Bare was teaching him the doctrine Sowa Rigpa, Tibetan medicine. Afterwards Karmapa spent a while with Lama Tsultrim Rinchen and received the following teachings from him:

Then Rangjung Dorje was learning from Ringzin Kumaraji, the most significant teacher of doctrine “The Secret Essence” (Tib. Snying thig) in tradition Nyingma. These teachings, brought into Tibet in VII century by pandit Vimalamitra, are pointing to the direct experience of Buddha state, reached on the path of naked awareness. They made a great impact on Rangjung Dorje: In a deep meditation he saw Vimalamitra, who dissolved himself in Karmapa’s head, in the upper energetic centre. Greatly inspired by this experience, Third Karmapa later joined two streams in his teachings: the Great Seal of Kagyu School and the Great Perfection of Nyingma school.

The depth and breadth of knowledge of Rangjung Dorje is sometimes compared to Renaissance in European culture. He acquired a great knowledge and attained realization in most Buddhist doctrines brought to Tibet and described his views in many precious treatises. From those that were preserved to our days, for a Kagyu school the most important one is “Profound inner meaning” (Tib. zab mo nang don) – a precious commentary on the essence of Tantra.

After completion of his studies Rangjung Dorje started to travel throughout the southern Tibet giving teachings and initiations. For three years he was living in Kongpo area, where many people attracted by his personality and reputation of Dharma Master, were inspired to learn and practice Buddhism under his guidance.

Over time the fame of Rangjung Dorje reached even ears of Mongolian emperor from the Tugh Temur dynasty and he invited Karmapa to visit him. Karmapa accepted invitation and soon went in direction of China, but his caravan had to stop on the road due to bad weather. When spring came, Karmapa and his escort moved forward. But on the road Karmapa saw signs that Emperor has died. Before continuing the way, Karmapa performed rituals necessary for Emperor’s death. When Karmapa and his entourage finally reached Emperor’s palace – it took place on the 11th day of 10th month of the year of Water-Monkey (1332) – it turned out that Emperor really passed away on the day when signs appeared. But still the Emperor’s family and the court were very kind and welcoming to Rangjung Dorje.

Karmapa recommended to the younger brother of the former emperor to wait for six months before he would ascend on the throne and predicted he will defintely become a great monarch. On the 15th day of the first month of the year of Water-Bird in a glamorous ceremony the Third Karmapa enthroned the new emperor.

In the year of Wooden Dog Karmapa was going back to Tibet to find and bring to the emperor the nectar of long life (Tib. tse chu) that according to legend was left by the great teacher Guru Rinpoche not far from Samye. On his way he founded many monasteries for Kagyu practitioners. A special one was built in China on the mountains of Tai Shan – five mountain peaks related to Manjushri. 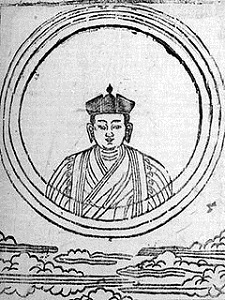 On his return to Tibet Karmapa was giving teachings and solving political problems a lot, but later he received a message from Tugh Temur – he invited the Teacher to visit China again. In the year of Fire Rat Rangjung Dorje and his entourage again traveled in direction to China. Along his entire route Karmapa was giving Dharma teachings. When he arrived to the court, emperor was glad to meet him. The nectar of long life brought by Karmapa, helped Tugh Temur to have a longer life-span as most emperors of Mongolian dynasties. On his arrival to China Rangjung Dorje established there a new Kagyu Monastery. And he even managed to stop the deterioration of climate, due to which in China often lost their harvest of grain.

On the fourteenth day of the sixth month of the year Earthen Rabbit (1339) Rangjung Dorje told the emperor that he is anticipating his own imminent demise. He went to the shrine of Chakrasamvara, meditated on this Yidam and died in this state. The next day after his death, as a farewell teachings to the emperor and his wife, Karmapa appeared again - his face appeared on the disk of the full moon.

It’s impossible to overestimate the influence of Third Karmapa Rangjung Dorje on development of Vajrayana Buddhism. The great texts and oral instructions he left behind have been transmitted to next generations through his most educated students. The most famous among them were the great scientist of Sakya tradition Yagde Panchen and lineage holder of Nyingma tradition Longchen Rabjampa. Names of other significant students of Third Karmapa include Shamar Rinpoche, Dragpa Senge and Tugh Temur.