The ultimate nature is often described as our true Mother. It is she who gives birth to and develops our own enlightened mind.

In Buddhism this principle is represented by the female Buddha Mother Tara. It is Tara who reveals herself in different forms and qualities of the enlightened mind, helping us to overcome all fears and difficulties on the way.

One of the root texts in the Tibetan Buddhism, practiced in all four traditions is “Praises to the twenty-one Tara”. And the 21 forms of Tara are:

The name of the first Tara, with all her Tibetan titles, is Jetsun Drolma Nyurma Pamo. Nyurma means that Tara’s activity is very quick and swift, without delay. Pamo is the feminine form of the term for a hero, which can be translated as “heroine”. It describes Tara’s heroic courage and commitment to the liberation of all beings.

The second emanation of Tara is named Loter Yangchenma. Loter means “knowledge giver”. The Tibetan term Yangchenma means “melodious, one who possesses melodies” or “source of melodies”. So we might call her Drolma Loter Yangchenma: Melodious Liberator, Source of Wisdom. In Sanskrit she is called both Sarasvati and Vajrasarasvati.

The third Tara is called Tara Sonam Tobche. Sonam means “merit”. It is also often translated as “good fortune, prosperity” or even “luck”. Tob is the Tibetan word which means “power, ability”, and che means “increasing”. Roughly translated, “liberator, increasing the power of prosperity and ability of merit” is the word meaning of this Tara’s name. Other very popular names for her are Vasudhari in Sanskrit and Norjunma in Tibetan. The effect of practicing on this Tara of prosperity is not just that we will acquire external or material wealth, but also that we will develop inner or spiritual wealth. By practicing on Tara Sonam Tobche, we can develop both forms of wealth.

Tsugtor in Tibetan means the topknot upon the crown chakra of a Buddha; this is one of the thirty-two marks of a fully enlightened being. Namgyal or vijaya means “victorious one”. Roughly translated, her names mean “victorious one of the top knot”. This particular Tara is renowned as the Tara of long life, with the ability to strengthen the life force, life energy, and vitality of all sentient beings. She is also protecting beings from taking rebirth in unfavourable situations or lower realms.

The fifth Tara is Wangdu Rigje Lhamo. She is Kurukulle in Sanskrit and Rigjema or Rigje Lhamo in Tibetan. Wangdu means power of “gathering, summoning”, or “magnetizing”. We can think of it as attracting everything beneficial, to benefit all beings. Rigjema means “she who precisely understands everything”. And Lhamo is “divine lady”. So she is the Tara who precisely understands the power of magnetizing.

Kurukulle‘s practice is very extensively taught throughout Tibetan Buddhism. She is often named the “Red Tara” because of her colour.

The name of sixth Tara is Jigje Chenmo. Jigje means “fierce, frightening” and Chenmo means “Great One”, so this Tara is great, fierce Tara. She is renowned for protecting against any negative force we feel is disturbing us, whether it is due to invisible beings and negativities or visible obstacles.

The seventh Tara is known as Zhengyi Mithumba. Her name means “unconquerable, cannot be defeated by others.” She destroys all negativities.

Zhengyi Migyalma’s name, roughly translated means “invincible lady”. You can’t win against her. So, if you’re a mara, or demon, better leave her alone! Or better yet, be nice to her. This Tara can also protect against troublemakers, persons who criticize and harass others, and people who bring lawsuits.

Green Tara, who protects from all external fears, is named Tara Sengdeng Nagchi or sometimes Sengdeng Nagchi Drolma. The Sengdeng is a very large tree, known as teak in English. Sengdeng is considered a wrathful tree. In Tibet damaru and chod drums are made from this strong, dense wood. In Tibetan medicine the bark and resin are used to make a tea considered very beneficial for the blood. As nag means “forest”, she is the Green Tara of the sengdeng forest.

The title Jigten Sumle Gyalma means “Tara who gains victory over all the three worlds”. Her special power is to protect us against distraction by worldly activities. She is associated with red colour.

This eleventh Tara’s name Phagmo means “noble one” or “supreme one”. Roughly translated, Norter means “bestowing riches”, so Phagma Norter Drolma is the Noble Tara who bestows wealth, renowned as Tara the wealth giver, who removes the sufferings of poverty.

Tara Tashi Donje means “Tara who actualizes auspiciousness”. Tashi means “auspicious circumstances” and Donje means “fulfilling” or “actualizing”. In particular, this Tara is renowned for bringing harmony and balance. Internally she brings health and physical balance and externally she brings timely seasons, good harvests, healthy children, and prosperity. With her help all becomes as it should be.

This Tara’s name in Tibetan, Tara Yulle Gyalma, means “Tara who gains victory over war”. She is renowned for protecting against all the obstacles related with wars. She can reverse the march of armies or stop the war completely. Her protection also applies inwardly, too, as she stops hostile emotions born of conceptual thinking that disturb our awareness and wisdom and might lead us to warlike actions.

This Tara is known as Thronyer Chen. Thronyer is “frowning, wrathful”, so she is the very wrathful, frowning one. She is a special emanation of Tara whose activity is removing subtle obstacles due to misleading influences, which are usually our most stubborn obstacles. She deals with our last “wrinkles” or , we might say, the last two per cent of our delusions, deep within the elemental nature of human beings.

White Tara with a blue Lotus

Tara Rabzhima’s special activity is purifying our most serious errors and greatest obscurations, so she is called the Tara of purification. Rabzhima means “supremely peaceful”.

Red Tara with two crossed vajras in the lotus

The sixteenth emanation of Tara has special powers to stop the negative intentions of others, such as spells and curses. Her name is Tara Rigngag Tobjom. Rigngag may have several meanings, but in this case it refers to misusing the mantra or other aspects of practice for evil purpose, to harm. Thus the meaning of her name is “Tara who destroys the power of bad intentions”.

Tara Pagme Nonma protects against obstacle associated with robberies, gangsters, and hunters. She brings beings into a state of calm and tranquillity, so she is the Tara of non-violence. Her name Pagme means “immesurable, countless” and Nonma means “stopping”. So this is the Tara who stops countless violent activities.

This Tara’s Tibetan name is Tara Maja Chenmo. Now mayura is the Sanskrit word for “peacock”, which is maja in Tibetan, so she is the “great one on the peacock”. Peacocks are especially associated with protection from poisons because it is said that the peackock eats poison and transforms it into the beauty of its plumage. Thus Tara Maja Chenmo’s special activity is counteracting or dispelling inner and outer poisons. These might be from food, water, environmental pollution, or any type of unhealthy situation. Maja Chenmo is also renowned for her compassion in protecting infants and young children. It is thought that she saved the life of Nagarjuna. 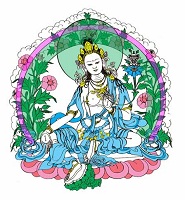 Tara Dugkarmo is a famous emanation of Tara who protects from nightmares, bad omens in dreams, and black magic. She especially protects the Dharma and the lamas from arguments and violence. Dugkar means “white umbrella”, so she is often called Queen White Umbrella.

The white umbrella symbolizes that she is held in the highest respect.

Tara Rito Loma jonma is known for giving protection against contagious diseases, plagues, and fevers. Roughly translated, Rito means “mountain hermitage”, Loma means “leaves of a tree”, and Jonma means “wearing”. So this is the Tara wearing the leaves of a tree in her mountain retreat. In many of the traditional stories about Tara, she appears as a lady dressed in leaves to save a devotee from a fearful situation.

White Tara with a blue lotus on a golden fish

Tara Ozer Chenma is the divine great Mother of “brilliant light rays”, Ozer. She is particularly beneficial to us because she can protect our longevity. She helps us when our energy, vitality, or life force is endangered. She is also renowned as protectress of animals.